Marine oil spills are a major threat to the ecosystem and can cost the industry billions of dollars. However the use of absorbing or dispersing agents may help in quicken the clean - up process, especially in rough sea conditions which make clean up particularly difficult before the oil reaches the coast. Well – known are the properties of clay minerals which have interlayer spaces allowing for absorption of polar and non – polar substances and toxic metals. They have also been identified to help with the dispersal of oil and the reduction of oil globules. However a lesser known property is their ability to increase the rate of bacterial growth (bacteria such as Pseudomonas sp and Bacillus sp) and also to help them with bioremediation and the breakdown of hydrocarbons.

Clays such as smectites kaolinites and montmorillonites can adsorb protons during hydrocarbon breakdown which helps to maintain optimal pH conditions which allows for sustained bacterial growth. Kaolinites are also hypothesised to increase oil breakdown by bacterial digestion with the formation of C – O – Na – Si complexes on the surface of bacterial cell walls, thought to increase nutrient adsorption leading to subsequent bacterial activity. The mechanisms behind these processes are not yet understood, as with many microbial activities, due to relatively recent popularity. This review focusses on a paper which looks at how the addition of clay minerals with large specific surface area and high cation exchange capacities can significantly enhance hydrocarbon breakdown over a period of 36 months.

Samples were taken from the Spanish beach El Bocal following the Prestige spillage in 2002. The oil represents the most toxic variety enriched with heavy aromatic components. Results showed that % hydrocarbon content was generally lower in sample with added clay minerals compared to no – clay samples. This significant reduction in hydrocarbons is due to biodegradation supported by a correlation between % oil and the number of cultured oleophilic bacterial colonies (those with a strong affiliation to oil). The high density of bacteria corresponds well with samples with the most extensive degradation and with clay minerals of larger specific surface area. It was approximated that in the clay samples bacterial growth was increased by three times however this does not allow for all of the hydrocarbon changes, especially in the most depleted sample. However, as the trial lasted 36 months it is impossible to measure bacterial population changes over time and how each would affect the hydrocarbons.

PH conditions in contaminated water samples were also seen to be more stable than non – contaminated samples suggesting that during biodegradation a buffer is produced. Although clay containing experiments were shown to increase biodegradation, the adsorption of protons suggested as a buffering technique seems to be outdone by the actual physical breakdown of the hydrocarbons, although why this occurs is not mentioned. As well as this no consistency was found when considering the stimulation of bacterial processes and subsequent breakdown of hydrocarbons after increased nutrient adsorption. Therefore a new hypothesis was put forward as to how clay minerals help to speed up degradation. The paper proposes the bivalent cations (cations missing two electrons, such as Mg2+), found in the interlayer spaces of the clay minerals derived from the sea water, bridge bacterial cells and clay minerals together. The trapped hydrocarbons adsorbed to the clay can then be easily ‘digested’ by the bacterial cell, speeding up the degradation process. Therefore, porous clay and its potential adsorption, the bivalent cation bridges and the direct contact of bacterium to nutrient rich sources all contribute the bioremediation of oils. Even if this hypothesis is not completely correct it had been made obvious once again, that the addition of clay minerals accelerate the natural breakdown of oil and should be considered as a cost effective tool in oil clean up.

It sounds like the clay is a catalyst like an enzyme providing a structure on which the oil and the microbe can be held together. It gives me an idea that maybe these biodegraders need some sort of matrix or biofilm to hold them on the oil spill, maybe the degraders could be incorporated into a biofilm with clay as some sort of clean up sheet. Future research maybe? 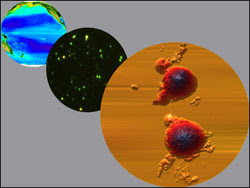